It was as you predicted and my secret garden

Several of you predicted that it would be one of the nylon gears under the sewing arm of my Mom’s Singer 534. 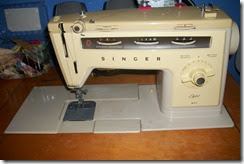 You were right.  I’ve located the part and the installation instructions and I’m about to pull the trigger on replacing that.  I’ve only hesitated because I can’t find the timing instructions for free and haven’t given up and paid for the service manual yet.  If I have to take the machine in to have it timed, that’s okay.  It is kind of an heirloom.  But, of course, I’ll try timing it myself, because I’m cheap.  I don’t need to deny it.  I’m cheap.

Unfortunately, I think I might have been a big contributor to the demise of the original nylon gear.  I made a real beginner’s mistake.  I oiled from the top down, and before I oiled from the bottom up, I tried to use the machine.  I could tell it was in a bind and working hard.  It hadn’t been used or oiled in a long time and I should have started with a thorough oiling all around, and then tested the machine.  Instead, I oiled the top and used my test sewing to determine where to work next, and I just didn’t get under the machine fast enough.  Well, that and I don’t know how many years it had been in the cabinet, unused.

I love to tinker with machines and this will be just another challenge.

Rob took a video of my garden over the weekend.  Just a short bit of what was going on out there before the rains started.

And, I noticed that he took a video last year, almost to the day, so I’m linking it here, too.  It’s a bit longer.

Okay, that is it for me today.  No big sewing.  I’m finishing up a hand quilting project that I can’t share yet and spending every spare minute on it.

Sydney went to an awards banquet and won an award…at least I think it’s an award.  “You want sass?  I’ll give you sass!”  It came with a certificate and a speech and everything.  The small print says “For never pulling her punches and always speaking her mind, which is a rarer quality than some might think.”

We taught her that.

I wish we’d been more careful cuz that stuff comes back and bites you in the butt, sometimes, like when she repeats my words back at me.

I'm completely enjoying your machine posts! I hope you keep going with them. Great post!

Well done to Sydney! I congratulate her on her win.
As for you we call 'cheap' in Scotland 'watching your hard-earned money'. I am so pleased that you don't splash your cash about. When i think about it, that is why there are so many great engineers from Scotland: they too had to think through problems, rather than just reaching for a handy pot of money!

Gooooo Sydney!! A girl after my own heart. If you are speaking the truth (not in a hurtful way) it is a wonderful thing!

I love that you can work on your machine motors! I'm as dumb as a brick about things like that....and Rick is as well, so I'm SOL!

YAY, Sydney!! That's a FANTASTIC award for a teenage girl. You and Rob should definitely be proud to have raised a young woman with a voice. :-)

Your oiling woes worry me. I have not yet oiled the two Featherweights I acquired over the past few months (year?) and, although I took them to a tech to do the initial work on them and I know he oiled them at that time, a little voice in my head has been suggesting that it might be time to oil them again. Because these older machines DO need more oil than their modern computerized counterparts, right? I oil the new Bernina every bobbin or so (HUGE bobbins) but she only takes a drop of two of oil in two spots. The featherweight manual has SO MANY ARROWS where you're supposed to oil that it's downright intimidating! Do I need to oil the Featherweights in a certain order? I'd hate to wreck those little gems. I've been piecing my bear paws on the '35 machine and she pieces so perfectly that it's like she's done this before with more experienced owners -- like the machine is piecing perfect triangle points in SPITE of me! :-)

Oh, what a fantastic award to Sydney to have won. Those are definitely traits that will take her far in life.. She is such a breath of fresh air, and I am so proud for her and you as well.

Stop and try to slow things down, she will be graduating before you know it.....trust me!