Last night, I took the mini quilt to guild for show and tell.  It was a real ego boost.  I walked up to the mic, said my name and they unfolded it and I watched the ladies lean forward and all say “ooh!” at the same time.  They didn’t hear what I said after that, which was “I went to Sally Collins’ class last month.  I think I liked it.” 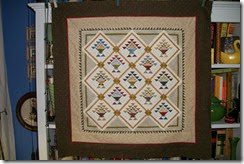 Heading back to my seat was like walking a runway.  I’d have to stop every few feet so someone could get a close look at it.

Made me feel good.

Yesterday was also the day to visit with the doctor about my upcoming test.  Okay, y’all.  that doctor was a freak.  And, I’m not sure what I should expect from somebody that does 50-60 of these procedures a week.  For 15 minutes, he did a stand up comedy routine about it, including every butt, rear, and behind joke ever written and some I think he made up himself.  I just sat there with my mouth open, waiting for him to let the shoe drop and for him to tell me something bad.  He never did.  So, at the end, I thanked him for being funny because it helped me relax.  Even though relaxed looked really tense right that minute.

He was cool.  Someone will call today to schedule.  and, then it will be done.

I also wanted to show this.  It’s a Linus afghan.  My valuable fabric storage space is being used to store yarn, so I’ve decided to make up a bunch of afghans and move it out.  This is the first one. 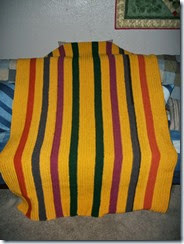 Next one is yellow and grey and white.  Very modern color combination and done up in a baby afghan.  But, very soft and thin yarns.  But, before I can start that, I have a small quilt to hand quilt, so you’ll likely be seeing pictures of it as I make decisions.

Everybody have a great Tuesday.  So much to do, so little time.  I remember when I was a Martha Stewart-ite and spent all my time keeping house and making things out of leftover other things.

I am so glad you had fun last night at guild. The quilt is beautiful - your creativity is exploding. When I was working all I thought about all day at my desk was all the things I wanted to make and now it has come true. I just started knitting and a teen will love the blanket. I have to get back to my hexies.

Lane, you are an extremely talented quilter & I'm so glad the ladies at guild gave you your props! That mini is so beautiful!

My "procedure" is next Wednesday. I'm right there with you.

About seven years ago, I had my gallbladder out. A stone escaped during the surgery and they were worried about it causing pancreatitis, so they admitted me to the hospital and were going to do an endoscopy the next day to remove it. The surgeon's P.A. came to check on me & update me on what was going on. He was a real Poindexter, perfectly coifed blonde hair, tall, muscular, well dressed. And he was very condescending towards me and my SAHM status. When he came in to do another update when Mr. Bug was there, I told him how rude he'd been earlier. A few years later, Mr. Bug had a colonoscopy. On the way out to the car after it was all over, and loopy from the anesthetic I'm sure, Mr. Bug told me that the same P.A. had been in on his procedure. His comment on that was, "I guess it is fitting that the guy who does colonoscopies for a living would be such an a**hole."

Hopefully, that wasn't totally inappropriate. I don't use language like that, but it is good to laugh at a uncomfortable/scary situation. Helps you put things into perspective. Have a good one.

Oh how funny -- I can relate to the "Martha Stewart Days of cleaning my house and making things out of recycled other things!" I used to feel so depressed when I looked at the "Martha's Calendar" that they used to print in every issue of Martha Stewart Living, where it showed which days Martha would be canning vegetables from her garden, or polishing her copper pots, or digging an elaborate drainage system for her garden in a design that looked like crocheted lace from outer space... I tried to "bless my family" with sheets that were ironed and scented with lavender, but ended up burning my thumb and blessing my children with the knowledge of lots of new swear words instead!

I'm glad your Sally Collins quilt was appreciated by your guild. I can tell it's a masterpiece just from the photos; I'd love to be able to see it in person!

I wish I could have been at the guild to get a closer look at your quilt-- it's so precise and pretty!

Your Linus afghan is huge! How did you do it so quickly? It reminds me of the Washington Redskins, it should be a hit with sports crazy teens.

your quilt is lovely, it deserves all the admiration it gets! I have had several colonoscopies, I have had the cancer that makes them necessary and they are not nearly as bad as people might think. I even had one without the anesthesia. But it is better to have the test and catch the cancer early. No chemo!!