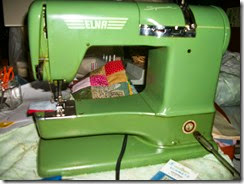 As I’ve worked out the kinks, I’ve realized more and more what a great bargain I got for $20 plus $30 shipping.  It’s very quiet and plenty strong and it makes a great stitch.  It’s lightweight and simple enough for me to repair on my own.  The attachments box came in the mail yesterday. I bought it separately from another vendor. 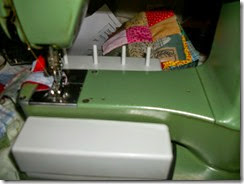 It’s from a later model.  The one for this machine would have been green, or more likely, black.  But, they made the supermatic model for 30 years and the parts were interchangeable like this.  The cams, too.  For a long time, all they changed was the color.  So, if you don’t care about color, there are lots of replacement parts out there real cheap. 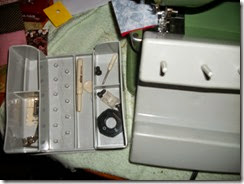 I bought it because the price was great and it had several attachments, including the free motion/darning foot and the feed dog cover that is used with that foot (second most important foot to a free motion quilter).  Those two pieces would have cost more than the machine and the attachments box, if purchased separately.

All that’s really left is cleaning up the carrying case. 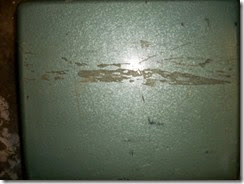 Those aren’t scratches like I first thought.  They’re tape residue.  There has been a lot of tape residue.  Apparently, the sewist that owned it before used masking tape on the machine bed as a seam allowance marker.  I used oil and a wool rag and that came right off.  But, I think this is plastic strapping tape and I’m worried that it’s going to take something more chemical to remove it.  But, I’ll start with oil and a rag and see how that goes.

I think this machine is going with me to bee this weekend.  She’s certainly up to the task.  And, I’m just making 9 patches for a Linus quilt.  It’s so nice to work on something mindless after that mini quilt.

If you’re looking for a lightweight machine to carry around, I’d rank the ones I own in this order.  The 1950’s featherweight, the Singer 301, the Elna Supermatic, the 1960’s featherweight.  The cheapest of those machines is the Elna, by far.  And, it makes a zig-zag and the others are straight stitch only.

Everybody have a great Thursday.

There's a solvent called "Goof Off" they sell at Home Depot that will remove the tape residue without removing the paint.

I like your list. In terms of which machine I'm most likely to bring along, it's my 301, followed by the Featherweights. I also have a Rocketeer 401a that gets used a lot, and the cams are cheap and all still available.

If Sydney has hair spray, spay some in the cap...dip a qtip into the spray...and do a little at a time. It will take the sticky away...

Your little green Elna is just the cutest machine EVER! If my son hadn't bonded so strongly with the 1951 Featherweight, I would now be on a Green Elna Hunt for him because green is his favorite color. Still might, actually -- because then I'd get my Featherweight back! :-)