Two more days ‘til vacation.  I thought the sitter was going to back out last night.  Something came up.  But he got it all worked out.  Really, I didn’t need to know.  I loved house sitting when I was in my 20’s.  Other people’s TV and fridge in exchange for a couple of chores.  Anyway…

This post is long and if you’re not interested in making a backpack, pretty boring.  Lots of pictures and me showing how much I don’t know about sewing.

If you sew a lot other than quilting, this will probably make you cringe.  I don’t know what to call stuff so I describe it in my own ways.  Anyway, here we go.

Any good sewing project starts with a pattern.  But, I couldn’t find one.  So, I drew one.  This pattern has two pouches to the backpack.  There’s a front, smaller pouch and a back, larger pouch.  And, the way the strapping is attached, the backpack hangs straight, even when the strapping is hung across the neck.

First, I thought about what I want to put in the backpack.  Every year, I create a file folder of stuff for Sydney’s school; teacher contact lists, paperwork that I need to keep up with, etc.  So, it needed to be slightly larger than 8.5x11 inches. 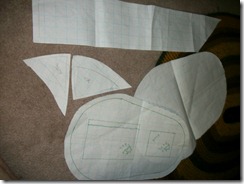 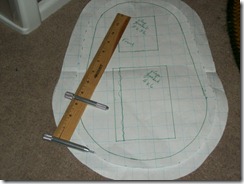 The side sections were created during my muslin, so I’d know the right size.  The side panes are 24 inches along one side and 29 inches along the other side and they are joined with a diagonal line.  Cut two from a folded piece of the fabric so they will be opposites. 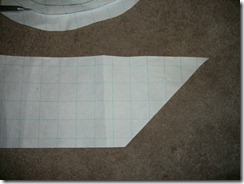 The other two pieces are triangles to attach the straps and we’ll talk more about them later.

First, I cut out two copies of the front panel.  Those are going to work together to form the front pouch.  Serge around both.  Add your pockets to the front of the first one.  I’ll leave that to you as I’ve created two flap pockets for the front of my backpack and one zipper pocket for the front of Rob’s. 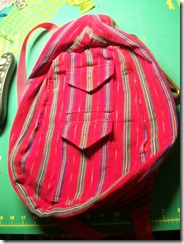 I also added a pencil pocket to the right side of the inner front panel so it is  inside the backpack.

Once you have your pockets on, you need to notch the front panels for the zippers.  I started at the center of the top and measured out 2.5 inches and notched the fabric.  Then, measure from there, 12 inches down the side and notch it again.  My pencil and scissors show where my notches were. 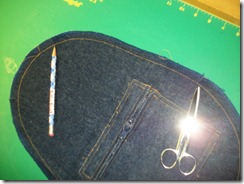 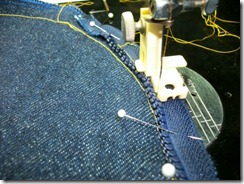 Fold the zipper to the inside and topstitch a quarter inch inside of the fold line.  Make sure the zipper teeth are on the back and not sticking out of the edge, or they will scratch you when you put your hands in the backpack. 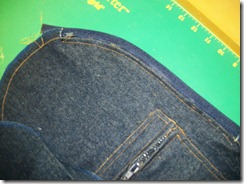 Now, put the two front panels right sides together and sew between the remaining zipper notches.  Press the seam open, notch the curve once or twice, turn it right side out.  Pin the zipper to the inside piece.  Starting from the top of the first zipper, sew 1/4 inch all the way around the piece to the bottom of the first zipper.  This will attach the second zipper to the piece.  Now, you have a double thickness, with a zipper on each side. 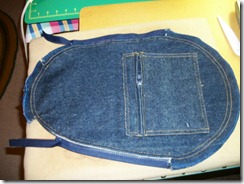 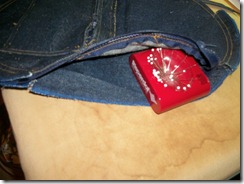 The first zipper opens to a pouch.  This is the outer front pouch and there will be a bigger pouch formed behind it when the sides and back are added.

Serge around both pieces of the side sections.  Join at the top and bottom using a 5/8” seam and press these open.

There’s a peak at the top of this joined section.  Spread it open and lay flat and lay the pattern for the back on top of it and cut the peak to match that curve.  I serged this, too.  I think of the joined side sections as a circle with a smaller opening and a larger opening. Mark the centers on the front section, top and bottom… 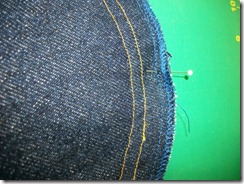 and pin the side section to the front section, right sides together, matching the marked centers to the side section top and bottom seams for the smaller opening.  One side will include sewing in the second side of the second zipper.  While most of the seam will be a 5/8” seam around, the seam along that zipper will be narrower, so be prepared to adjust to a smaller seam allowance in those inches.

Turn this right side out.  Along that second zipper, the zipper teeth will be exposed.  We’ll fix that next. 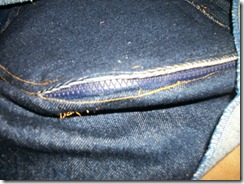 Fold the fabric such that there is a fold line along that zipper and the zipper teeth are covered and pin that down from the outside.  From the inside, put the side section under the presser foot of the sewing machine, including all the seam allowance.  Sew all the way around.  This is going to do several things.  It will give you a quarter inch top stitching along the side section of that seam all the way around.  It will create a lip to cover the second zipper teeth and it will hold the seam allowance to the side section so it isn’t flopping all around in there and raveling. 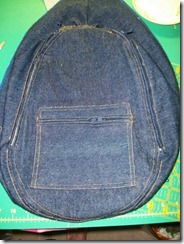 Now, we’ll add the back.

Cut one back from the fabric.  And, cut the strap holders.

The strap holders are triangles.

Upper:  the two short, perpendicular sides are 4” and 6.5”.  The long side that matches them is the same as the curve of the back fabric at the top, putting the 4” side of the triangle at the center top and drawing a concave line between the ends of those two perpendicular sides.

Lower:  the two short, perpendicular sides are 4.5” and 6”.  The long side is the curve of the back at the bottom with the 4.5” side at the center.

Serge along all the curved sides.  No need to serge the others.

After you get those two triangles figured out, lay a ruler across the tips where the perpendicular sides come together so that the ruler is at 2” and whack that point off. 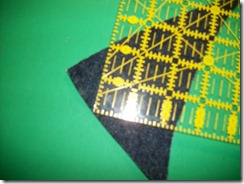 Lay the webbed strapping along that line.  Cut about 8” off the end of the webbing strap.  That’s going on the lower strap holder 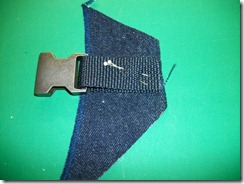 There’s a loop of webbing and the female end of the buckle.  Lay the other triangle atop this, right sides together and sew along three sides, leaving the curve open.  This is the only place I used a quarter inch seam, so cut them bigger if you want 5/8”.  I didn’t want to deal with the extra seam allowance in the turning.  I also clipped the corners to make them look neater.

If the female end of your buckle has a pretty side (mine did, but Rob’s did not) spend some time thinking about how to lay that in so that the pretty side will be to the front when you’re finished.  Or, buy a buckle without a pretty side on the female end.  The male end can be put on anyway you like, later.

If you aren’t sure whether you’ve got the pretty side out, you could lay just one end of the webbing on the lower strap holder and sew it in and make the loop after everything else is finished.  If you did that, you’d be sewing the webbing to the webbing to form the loop.  Don’t know any reason that wouldn’t work.  Sorry, I figured it out when I made mine, but I cannot tell you how I laid it out now.  I’m pretty sure a whole lot of luck was involved.

The upper strap holder just gets one layer of webbing sewn to it and that will attach to the male end of the buckle.

Once these are turned out, top stitch around the seamed sides at a quarter inch from the edge.  On the curve, sew it closed at 5/8” and clip the curve from the raw edge to the seam as this concave curve will have to be stretched to a convex curve to attach it to the back.

Here’s where it all comes together.

Serge around the back.  Fold the back in half and mark the center line.  Pin the strap holders to the right side of the back with the strap holders and webbing pointed inward, one on the left and one on the right, spreading the clipped concave curves open as necessary to match the convex curve of the back.  Remember that the shortest sides of the holder are closest to the center.  The reason I did that is I wanted the backpack to hang straight up and down even though the strap was crossing my chest at about a 30* angle.

Open the second zipper…don’t make my mistake.  If you don’t open that zipper, you’ll make a ball that you can’t get into to turn it right sides out.

Pin the side sections to the back, easing as necessary.  Sew this down, all the way around.  I sewed it double. 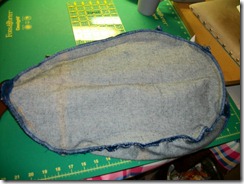 Turn it right sides out and you have a small backpack with two pouches and however many pockets you chose to add. 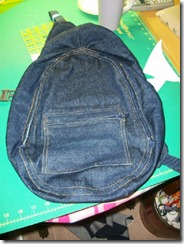 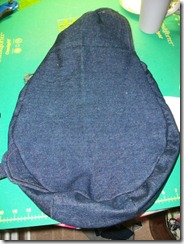 I don’t think either one came out perfect.  But, I made three, including the muslin, and they got better every time.  So, I recommend that you do make the muslin out of something cheap.  I didn’t put the zippers in my muslin and that was a mistake.  I should have.  The second set of zippers is much better than the first.  If I had put zips in the muslin, I could have pulled them out and used them again in the real thing.

OOOOooo! THANK you.~ I am going to do this for my teens birthdays coming up! I wish I had done this for oldest son's trip to Vegas today. Nice. You are so sweet to share.
Lucy~