One of the things I got done this weekend was adding the flower centers to the satin stitch applique blocks. 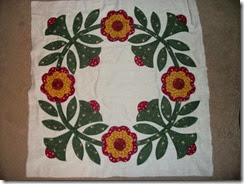 These four blocks really were quite dated and the fabrics shouted late 80’s, early 90’s.  But, the addition of some new fabrics and some nice stitching and they’re actually a very respectable job.  I don’t know if I’ll ever do much satin stitch.  But, if you’re considering it for a project, know that it wasn’t near as hard as I thought it would be.  And, it goes faster than I expected.  I wouldn’t hesitate to do it again, if the right project came along. 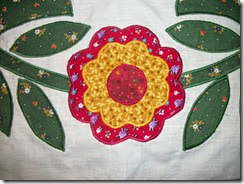 I’m also doing the ditchwork on this holiday quilt.  I have no idea what comes after that.  I thought I’d just start and see if inspiration finds me.  Sometimes that works. 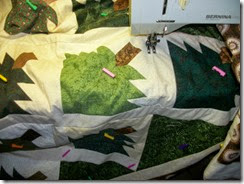 This week ends the first grading cycle for Syd.  We’re having our same old issue, not turning in work on time.  So, the whole family is focused on that right now, trying to encourage and keep her motivated, but really, I’d gladly do her a grievous harm right now because this happens over and over and over and over and our reaction to it never wavers.  And, she always manages to pull it off in the end.  I don’t know how.  And, it’s way more work and stress than it needs to be.  But there are some things we can’t change, and we just need to manage through them.

In the meantime, I’ll keep sewing as much as I can because that, I can control.  Be well everybody.

I love the improved flower block, the red was the right fabric.

Since my stash spans about 25 years of quilting, I've got some of those "dated" 80's and 90's fabrics still waiting to be made into quilts. I'm pretty cool with fabric shouting it's trend-year at me so long as it looks good with whatever I stuck it in there with. I've got some 1930's repro fabric next to my 301 right now waiting for inspiration.

"...In the meantime, I’ll keep sewing as much as I can because that, I can control." EXACTLY! We're in the same situation at our house, with my older son sliding back into his old ways of work avoidance and now my younger son having some issues with not turning work in as well. My 8th grader actually told me yesterday that he has decided that he doesn't need to pass his honors math class this year because he can just take it again next year in high school. Where does he get these crazy ideas?! Quick, somebody hand me some fabric, I'm hyperventilating!!!

oh my husband is like that, "last minute dot com" and drives me mad, as I would rather do something way ahead and then forget it, rather than have a mad scramble at the 11th hour.
I don't know what the answer is Lane. I'm still trying!

My first instinct is to say "give Sydney the guidelines for what you expect in school and the consequences for not meeting the expectations and then let her figure it out and you do your projects". Buuuuttttt, I'm not sure I'd be able to do that myself! ;> We got 5 teenagers through high school - 3 at once with 1 year between them, then a small break, then 2 more pretty close together. You feel like a crazed fool if you're trying to make sure they do their work while you do your work. Nobody in the real world will follow them around daily and make sure they do their "chores" and by the time we got to the last 2, we just gave them the "speech". We're here to help you and you can come to us whenever you need to, but turning in your homework on time and getting good grades is your job - ours is making sure we have food on the table and a roof over our head and electricity to cook with and and and. It sort of worked. They weren't nearly as punctual with things as I would have liked and there were a few "heart attack" moments, but they both graduated! ;>