Like everybody else, I wish every day was a weekend.

Saturday, it was 108* out.  I watered outside in the corners of the flowerbeds that the sprinklers don’t get early in the morning and then I tried to do a few things around the yard, but I was soon driven into the shade, and then into the house.

We went out for dinner, but it was miserable and all I wanted was to eat something quick and cold and go back home.  I even offered to have ice cream for supper and they wouldn’t go for it.

But, Sunday morning, I woke to thunder about 3:30 and took the dog out.  It was sprinkling and it rained on and off for a while and then it quieted down.  About 5:30, it started and it rained good and steady for a good while.  If only we’d been more sure, we wouldn’t have watered on Saturday at all.  But, you can never tell in Texas.

Anyway, that made for a much more pleasant day and it was only 75 when we went out around noon.  We did some shopping and then we were back home again because the humidity rose as the day warmed up to about 95* and it was very sticky.  Chores and a pineapple upside down cake and overall, I think it was a pretty good weekend.

Our shopping was for vacation clothes, underwear mostly.  There was this whole long thing where they tried to get us a sale price on some underwear and people were talking about women’s panties over the intercoms back and forth and it was long and miserable and I don’t know who wanted to crawl under the counter more, me or Sydney (yes, it was her underwear) and there were lines at all the counters and a family behind us patiently waiting.  But, we smiled and persevered and I told the lady I really just wanted to pay and go, but they insisted that they make it right.  We ended up saving $5, but I don’t know if it was worth it.  Rob said it was like watching something in a sitcom where they ask the price of underwear over the loud speaker.

And, I cut hexagons.  Hundreds and hundreds of hexagons.  I was cutting them 6 and 8 at a time in stacks.  The next border needs between eight and nine hundred of them.  Holy hole punch, Batman! 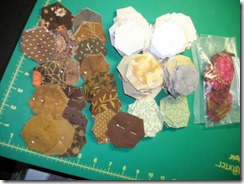 That should keep me busy for a while, huh?

Everybody have a great Monday.  It’s quilt guild tonight.  The speaker is Liz Porter of Fons and Porter.  I plan to get there early enough for a good seat.

Liz Porter, sounds like fun. Report back to us why she's not on the TV show anymore, should it come up. Enjoy Guild!

Good Afternoon Lane, Oh no, shops, queues, underwear and intercoms.... sounds like you had a stressful time shopping.
How do you manage to cut 8 hexagons at a time, do you have a special machine? If I tried that, I know I would make a mess.
Enjoy your quilt evening.
Best Wishes
Daphne

108' WOW!
Your cutting board looks a bit like mine this week, as I am fussy cutting hexagons. I was a little surprised that I have next to no fabrics with large patterns, most of mine are small prints.
Looking forward to seeing your progress soon.

ps my husband says any man who shops with a teenager for undies deserves his repect :-D

Oh, enjoy tonight's program! I've always wanted to see Liz in person and of course wouldn't mind the scoop about why she is no longer on the program. I'm hoping it's because she is "really retired" and has grandchildren in Austin, or something along those lines. Sounds like you had a good weekend, with a little to laugh about. Not every time you go shopping can you be the model for a sitcom.

Love the ambition of the hexie quilt and border-- it's going to be phenomenal.

I remember a 9 year old Chinese boy translating underwear information for his grandmother at Victoria's Secret a few year ago. He was so embarrassed, but he stood fast and did what he needed to do. I was so proud of him.

Wish I was going with you to meet Liz at your guild meeting-- what a fun thing to do!

I'd be happy to swap you some of our freezing cold at the moment for some of your heat . Then we could both be happy. 55F is not my idea of fun!