Both girl's teams won last night. It was so exciting. It was the A team's (Sydney's team) first win, and the B team second win. Last games of the season. And, they were very exciting. Our girls played their best game and the other team was equally matched and the win wasn't final until the end of the last quarter.

It was funny. I finally got to hear what the other team's parents were saying as they lost and it was the exact same disparaging of refs that I've heard from our parents in the last few weeks, so I guess that's just universal. Although I did think one of their coaches was going to tie up with the time keeper and the ref in charge, both. He was not a good loser.

Between games, we managed to get this pic of Sydney before she ran off again to sit with the team and watch (yes, actually pay attention) to the second game. 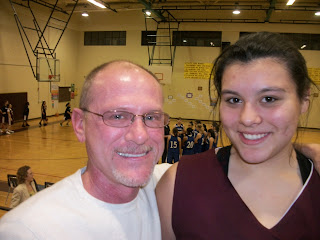 After the games, the team and a lot of parents went to a restaurant for a celebration dinner. Okay, so here's the funny story from that.

There was a dad that we observed for the first time last year in volleyball. He was a bit rough on his daughter after a game and I passed immediate judgment on him as wrong to do that. Fast forward to this year, and remember that game that Sydney cried through and I was maybe a bit rougher on her than I needed to be in front of the team. Sum that up as I'm much more understanding now than I used to be, having been on the other side now. But we'd never gotten close to this dad and we had shaken hands and met many of the other dads that showed up regularly, just not this one.

Anyway, who sits across the table from us last night but this dad and his wife. And, they were the nicest, most pleasant people. Kinda wish I'd let that happen sooner, huh?

Tonight, Sydney's best friend is coming for the night and I think tomorrow, they're going to see the latest vampire/werewolf/love story. I've agreed to go IF I can go see a different movie. Theaters are too expensive to nap through a movie and after I get my bellyfull of popcorn, Mr Pattinson puts me right to nappy time. (Sorry Elizabeth. I know you love these movies.)

Other than that, it's going to rain all weekend (YEAH!!) and I plan to spend as much time as I can surrounded by my quilting and ignoring the dirt in the kitchen.

Sydney is going to be one gorgeous woman. Her bone structure is great and that dark hair and dark eyes combination is going to be hell for you two dads! (oh! and those dimples .....) She looks so happy and glowy in this photo. I'm sure you're so proud of her.

Have a great weekend!! Love the pic....so cute!!! I hope to sew on they mystery....I have had a brain freeze today and can not think, so I put it all away and shut the door to the sewing room. Seriously, how hard is it to make HST....evidently for me, pretty hard today, can not get it right...math wise.....oh well. Tomorrow!

A rainy day of quilting and ignoring dust--my kind of day. lol

Something is different about Sydney in this photo - something about confidence and self-assurance... perhaps the other photos - ones of her clothing, for example, made her self-conscious - here she looks vibrant and oh so confident... and, bad for you, mature!!!!