It's time to paint the bathroom. And, it's time to do some shower repair. One of the problems we have is that our shower is about the size of a postage stamp...okay, I can't lie. It's really the size of a telephone booth. But, unlike the TARDIS, it is not bigger on the inside. Anyway, the shower jet hitting the corner means that corner is in a constant state of being repaired...a couple of times a year. So, I decided that maybe it would be better if the shower jet didn't hit the corner, but rather hit the floor or a wall. Only took me 13 years to figure that one out.

Anyway, I decided to replace the shower head with one that had more flexibility. Maybe a handheld. So, off to Lowe's Sydney and I go. We get home and I try the hand held and if I used the braket that came with it, it would only spray into the same corner that I was trying to stop spraying into. But, Sydney loved it, so she got that one as a new shower head. And, since our shower was out of commission, I got to try it and it was fabu in her tub/shower.

So, we went back to Lowe's. I couldn't find anything I could get happy with, so I basically replaced the pieces I was taking out with the same pieces, just aiming them at the floor. Would'a worked. But, as I was about to screw the pipe into the wall, I noticed that I had 9 1/2 inches above the pipe that I could take advantage of. And, I remembered this rain shower head from Lowe's.

So, we went back to Lowe's. Haven't gotten to try it yet. Another hour and a half until the grout is fully dry. 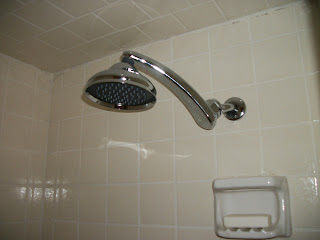 Now, when I shop, I shop slow and steady and don't get flustered. But, yesterday, I was with the kid and every time I made a mistake, she stepped in and helped. For example, we used the same self pay register every time we went. I couldn't get the credit card in the pay slot right, despite the picture they put on the side of the machine (and apparently despite the fact I'd just been there). So, she grabbed it out of my hand and took care of the transaction. I got flustered at some point of the day and never got back my gracefulness. I was uncoordinated and clumsy all morning. But, she was cool, calm and collected. Probably made me look like some elderly dementia patient as this child helped me out. But, I don't care. She liked it and we got through the day just fine.

I'm nearly done with LD's quilt. I'm working that narrow orange border now. Already down one long side. But, I've got a couple of NY Eve projects to complete so I'm up and moving. 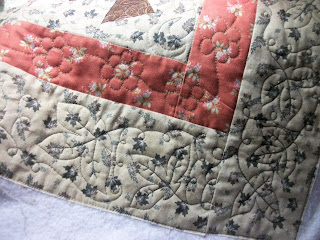 Washing those dresden plates went swimmingly. The wash water and the first two rinses were disgusting. Truly disgusting, brown. The wash water looked like I'd brought in a handful of mud and swished it into a sink of dishwater. Yuck! No wonder they were making me feel sick. Then, I layed them out to dry and I've got most of them apart as far as I wanted. The white cotton thread she used is tough as nails to get out, tho so it's slow going to try and cause as little damage as possible to the fabrics...which are in FANTASTIC shape. Stiff cottons and feedsack and a few dress fabrics.

Some plates, I'm just replacing one or two wedges. Some I've broken into pairs of wedges so I can put them back together with other pairs of wedges. Odd thing, there are 18 wedges to a plate. I'm used to plates that are divisible by 4, but these aren't. Hmmm. That could make for some very interesting re-construction dilemmas as she seems to have made the plate as big as it came out and then when she joined the last two wedges, she just made them as big or as small as she needed to get it to lay flat.

Secret time. I haven't done that in a long time. But, based on the old methods of handpiecing and scissor cutting, this was a very effective method. And, what tiny stitches. These were clearly put together by somebody that knew what she was doing. Except for the colors. That's so weird.

Take care and have a great New Year's Day. I've gotta get to the grocery so we can have our black eyed peas tomorrow and remember what it was like when our people were poor. Yes, we still do that. And, we each got an orange in our stocking, too. But, they were oranges from MY TREE!

I have been reading your blog for some time. I truly enjoy it! The way you talk about life with a teenager makes me smile. I've been there and it is not easy, but very rewarding when you see the result! My daughter was a handful and now she is a wonderful mother to the best grandchildren ever!
And I can't believe the wonderful quilting you do...
Thank you for sharing your life. Happy New Year from Louise in northern Sweden.

Have a wonderful New Year and I hope the shower turns out just perfect. xx

I love home improvement projects! When I first started reading, I thought rain shower head...and then there it was!! I bet you are going to love that!!! Hope you have a great day...last one of the year!! I am working on the Orca quilt, and have been so frustrated, wanted to put it away. Hopefully, I will get back on track this weekend. I can not stand to leave something unfinished!! Best wishes for the New Year!! Hope it is an amazing year for You, Rob and Sydney!!

Syndney is caring and compassionate.
I love those flowers on the border! Where do you get your ideas for what to guilt? I mean, WOW, your quilting is SO innovative!
I will look for antique blocks to study their construction techniques now. What fun about the 18 wedges!
Thanks, Lane, for such an interesting blog~

Isn't it odd when your kids step in to take "care" of you?!? When I am shopping with our oldest daughter especially, it is as if I speak a language no one understands, or I am so mentally fragile I can't even wipe the spittle from my face. Sometimes I just let her do her thing....she feels useful...but sometimes I assert myself and even ignore the knowing glances between the salesperson and my daughter....like "poor thing, just humor her". :c)

Happy New Year to you and your famly. Hope you don't have a lot of problems putting together the "plates".
Wait until granddaughter's step in to help, you will feel more flustered than you did when Sydney helped.
Patricia

Have a great New Year's eve and the best of times in the coming new year. Thanks for all the sharing.
cindy

I love reading your blog, I look for it everyday. I also love you are having black eye peas, my husband and I do that also. People look at me funny when I tell them we eat them every New Years.