I found this while I was sewing the knife edge closed on First, Inspired the other day and was quite disappointed. 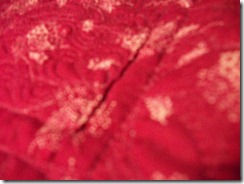 Yeah, sure, it’s small.  About two and a half inches long and in a corner.  But, despite all my wishing, it didn’t go a way on its own. 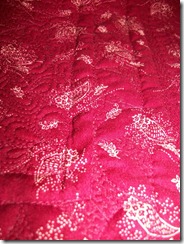 Yes, the extra fabric is still there…but you can’t see it as easily and it doesn’t cast a shadow.

There’s another crease down the front of the quilt, top to bottom, center that is from the fold line on the bolt of silk.  I washed the fabric and air dried it and ironed it before I started and the crease was gone.  But, as time has passed, it has come back, proving fabric has memory.  I tried to get a picture of it and the camera doesn’t capture it, so you know it’s not that bad, but I can see it running through the feathers and the borders and can only hope that it will go away after the quilt is washed and blocked.  Nothing else can be done about it now.  I’ll share pics next week, after I’ve got it all ready to go.

I promised a story about the meatballs. 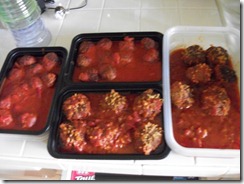 Like I said, I got meatballs in my head and I couldn’t let it go.  Two dishes are italian seasoned meatballs in Spaghetti sauce.  That’s what we had for dinner last night and I am having for lunch today.  They were delish!  The other two are “porcupine meatballs” which are made with uncooked rice in the meatball  that pokes out when it’s cooked like porcupine quills and a sweet tomato sauce with cinnamon and cloves and a bit of sugar.  Those were Monday night and were just as delish.  One container of each kind went into the freezer with a meatloaf from cooking the Sunday before.

I think my sudden compulsion to freeze food is because school is starting and I remember all those nights that we had a rushed sandwich, trying to get somewhere on time.  If I have stuff stored, we won’t have to do that…because it usually leads to late night tacos and that is bad.

Poor Sydney.  I see her grieving over the end of summer.  Right now, she’s in the denial stage, but I know it won’t be long until we get to angry.  Especially when we tell her that she has to take the tempting electronics out of her room for the school year and can only use them in the family room before bedtime and at night on weekends.  I’ve heard two different studies cited in a week about how 85% of dropouts have an electronic device in their bedroom and that while the parents are asleep, the kids are falling behind in their sleep and study habits and are zombies in class.  So, we will be the bad parents that do something about it and it will not seem fair and I will not argue about that with her, this time.  But, it will be the way that it is.  I know my little Syglet and she will not be able to stare down the temptation of an all night text party or video game without my help.

And, help is not always wanted.

Be well and be kind.  Be firm.  And, pat yourself on the back for something today.  Anything.  You get to pick.  And, if you can’t reach your own back, then just walk up to some random stranger and tell them to pat you on the back.  They don’t need to know why.  Their look of surprise will be enough.

Good morning Lane, I love reading your blog. I especially enjoy your stories about Sydney. Of course a teenager with all access to her electronics will play most of the night instead of sleeping.

So sorry about your crease, I had to really study the photo to even see it. Perhaps you can hide it more with a fold along a seam line and stitch in the ditch. Someone told me once that the Amish ladies deliberately put a mistake in every quilt they sew, because only God is perfect.

Huggggs (in lieu of pat on back) Have a super duper day.

Sorry about your crease. Hopefully, you're right and after blocking it will disappear. I have a quilt that had a BIG crease quilted in on the back. Since it was a children's quilt with a "bug" theme, I just made a running stitch along the edge of the crease with black embroidery floss and made a trail left by a butterfly (that I appliqued on). Disaster avoided!
I make porcupine meatballs often! My husband loves them! I use tomato soup as the sauce, as that is what my mother used. I cook them in my pressure cooker, which makes the rice really poke out!

Poor Sydney! It's only a few short years until she'll have to make herself put her electronics away so she can make a success out of her career...no wonder she's grieving the summer-- there's days I still grieve the loss of those wonderful teenage summers.

Lane, if you want to take creases out permanetly, (and I'm not sure on silk because water is a no-no) you need to combine 1 cup of white vinegar and 2 cups of water, soak a press cloth in it, wring it out so that it's not drippy, and use it to press the crease. I've heard there's a commercial version of this that doesn't require water, and since this is silk, you might be better off using that! This is really how you set pleats permanently, but it works equally as well in taking out stubborn creases.

I like to freeze meals, too. It makes life easier.

Yesterday was the first day of school for us. The kids were up and excited and ready and on-time. Today, there was a little grumbling from my 7th grader, but we were still on time. My 5th grader had her first (of many) melt-downs and we got to the school by the skin of our teeth. In the car on the way, I told her that school comes every morning at the same time and there will be no more mornings like this one. We'll see how long that lasts. I sucks to be the bad guy. That's the part about parenting I hate the most because I know what it feels like to be on the other end and I want to take all their hurts and sorrows away and make life easy for them. But that is certainly not doing them any favors.

Patting myself on the back for getting the kids to school without losing my cool.

Oh, Lane, I so enjoy your blog! My kids are long gone and I was the "hard" parent when they were still at home. I've sometimes regretted it, but certainly not in the long run, and the current input from the kids, who are now parents, is almost all positive. (Yep, still that word "almost", which means some of it is not positive. Still, I did the best I could.) And I loved Elizabeth's comment, about school coming every day at the same time ... can be applied to work, to housework, to budgets, to that sewing project that NEEDS to be done but doesn't have any immediate appeal. DO pat yourself on the back for being a good parent, over and over again. And when you enjoy those meatballs, too.
Muareen in Portland

I was drawn to what you said at the end of this post,"And, pat yourself on the back for something today. Anything".

Do you remember that song by "M people" which went "What have you done today to make you feel proud?".

When my son was little and I tucked him up at night, we used to ask each other that question. It used to be my favourite part of the day, hearing what made my little boy proud. Sometimes I would pretend that I couldn't think of anything I had done to feel proud and he would offer suggestions, some were funny some would choke me up.
He is 23 now and would give anything to have those years back again.
I still ask myself when I get into bed, what did I do today to make me feel proud?

Your mention of Porcupine Meatballs took me down memory lane...I used to make those years ago. I had forgotten about them. We froze many meals ahead too it is such a great idea for those busy nights.