Good morning and welcome to VTT sponsored by my friend Suzanne at Coloradolady.

This collection is one of Rob's. He's fallen in love with Norman Rockwell plates and has gone a little overboard. Today, I'm going to show about half of what we now have (since Christmas). And, just to complete the story, you have to know that he bought a series of 8 Christmas plates and bought two plate hangers to hold them. That was cute, but when the season was over, we decided not to take the hangers down. I pulled out some old collector plates I had and we really liked the 4 Norman Rockwell's I had. So, he started shopping and for almost nothing, and most of that paid for shipping, he's built us up a collection that can be changed periodically for some variety.

He found that this was a pretty rare plate because it has all three images (mirror, back, and drawn face). Most of the plates only have two of the images. 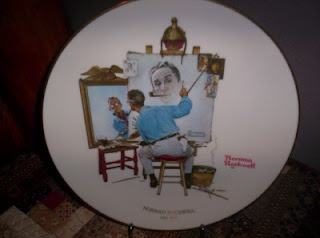 The next two sets are "four seasons" collections. The first starts with a boy buying a dog and proceeds through their adventures of that year. 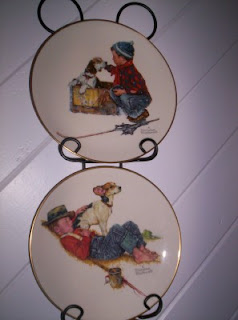 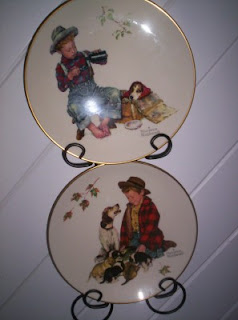 The second set features an older man and a boy (and a dog). These are recurring themes in Rockwell's work. 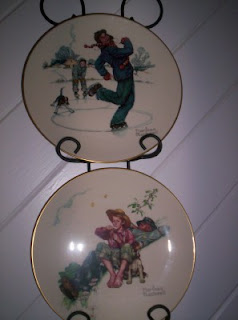 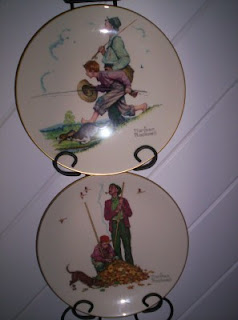 Rockwell's work reminds us of a happy time. We often get lost in those happy memories and forget that times weren't really any easier then, there were just fewer things to worry about and fewer decisions to make. The flip side of that is that there was less variety in life. But people were no different and basically still broke into the categories of those that chose to be happy and those that chose to be unhappy.
Not that much different than today.
Lane
Posted by Lane at 5:55 AM

There are great bargains in collector plates now that they are no longer popular.

I love the plates, and your last paragraph is so very true. Well said.

What a wonderful collections of Rockwall plates. They are a wonderful thing to collect if you have the room. I think it is great your husband has such an interest in them.

I used to have a book of Rockwell prints..... loved the detail in them all!

I've always liked Rockwell. I like the "snapshots in time" of simple human emotions.

You have a wonderful collection of Rockwell's plates. I don't have any but always like them.
Patricia

Love Norman Rockwell, saw one of his collections in the Wichita Museum last Saturday. I sure you would enjoy the museum that holds most of his paintings. I think it's back east somewhere.
Ann

In response to your last statement, I want to say "which category do you belong to?" but I don't think anyone would admit they choose to be unhappy, right, so it's really a mute question. I don't really think that's it, anyway. I can be really unhappy, and I don't want to believe that it's by choice. I find sometimes people make it too easy for themselves saying that sad people could just pick up and change their feelings around. Unfortunately, there's chemistry involved, maybe genetics, too, I don't know enough about that, and often, one just needs other people to pull through. I can easily be happy, or choose to be, if I'm surrounded by friends/family/a good social network. But if days are bleak and there's no one to talk to, choosing to be happy is not that easy. I like to think of it like money: if you have money, you can choose to turn the radiator on and be warm. If you don't have money to pay for heat, you have to work really really hard to get warm (running on the spot or whatever), and there can be many reasons why that might not be an easy task. Hmm, just my reaction to that interesting statement in the end. I really love the triple portrait, is it of Norman himself? I've never seen anything like that, usually I only see the one face, straight on, by other artists, so this one really does seem quite unique as portraits go - lucky find!

What a fun collection. He had such a fun way of catching everyday moments. I found a set of Norman Rockwell drinking glasses at my mom's house recently. They had the same type of images on them.

Unfortunately, too often, I choose to be unhappy. I think I'm lucky tho because I get to choose. I know people who are hungry and homeless and still happy and I know rich people who are perpetually unhappy.

I guess I was talking about more of an overall life experience than a particular moment. I think some people experience life ready to be happy and looking for things to smile about, and others wake up every day and choose to be unhappy and create that day for themselves.

I appreciate your comments. It raises ideas that I had not thought through when I wrote that sentence. Lane

I love your collection.. there is such wonderful expression and detail in them.. They're wonderful. Happy VTT,have a great weekend.

I love your plate collection...they are so pretty. Norman Rockwell is one of my favorite artists.

Oh, Lane...these are fantastic! And how great to have them to change out as the different times of the year evoke different decorations! I think this is a great collection to have...very nice! Have a great VTT!

Hi Lane,
Rob's plate collection is lovely. My hubby and I have 8 Norman Rockwell china cups his mother gave us years ago. Four are stashed in the china cabinet and four get used often for tea. The used ones look just as pristine as the display ones. Seems that they just don't make dishes like they used to.

Hi, Norman Rockwell certainly is charming and does lend to nostalgia. Looking to the past everything seems simpler,I think that is part of how a lot of people think as they get older. They forget things weren't really simpler, just easier because they were younger then! Great collection, wonderful display! Peace, Stephanie

I love Norman Rockwell, too! I insist on putting the yearly N.R. calendar, from the local insurance agent, on the door to our bedroom closet. I enjoy looking at it every day!