I decided to name this quilt "Storm in my Garden". I mean, with all that green and brown, what else could it be. And, right now, it reminds me of the promise of my garden. Right now, all green and brown, but later, bursting with color. 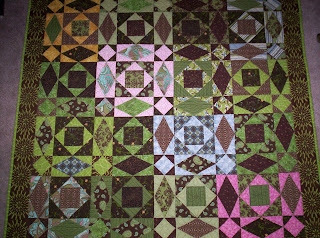 This is how I ended up handling the large square w/in a square w/in a square blocks and the diamonds. It all reinforces the circles and the ribbons that run through the quilt. Now, if I had this quilt to do over again, the right triangles that go around the diamonds would have all been mediums. And, the second round of the sq w/in a sq w/in a sq would have been light and the small squares would be light. I think that would have made a much prettier quilt as it would have continued the ribbons and circles. 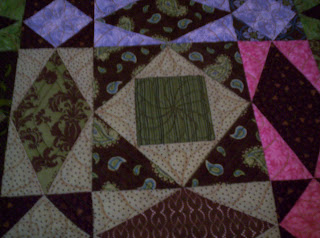 And, this little bit of freehand free-motion wonder that I found in a book and thought, I can't do that. But, I marked it on the vertical, horizontal and both diagonals and these little jewels were a piece o cake. 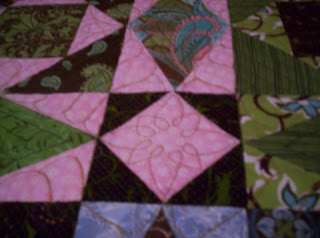 Here's a shot of the back. See the big flowers in the bottom of the shot? Each one of those is centered on one of the firework thingies in the border. They are not freehand. Had to cut these out and pounce them on. 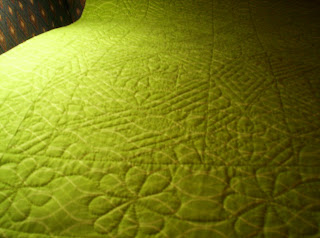 And, we finally got a good snap of the puppy. This took two of us though. I guess she doesn't like the flash and whenever we aim the camera at her, she turns her face. (Pay no attention to the ugly sheet on the sofa. It was laundry day for the quilt that's usually there.) 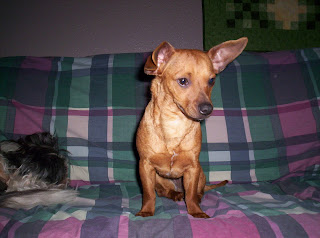 Take care and have a great day. The sun was shining and things are starting to pop out of the ground. Tomorrow it's off to Minneapolis. 16* at night. Criminey. I do hope to get up there and visit some of the great quilt shops one day, but for this trip? The only time I plan to be outside is on the airport shuttle. Lane

Lane--you did a great job!!!!!!! You got me thinking that "maybe" I can do some freehand quilting! You are so brave though, I am afraid to try on a "real" quilt, but I can't load a practice piece on--it seems like such a waste--so I am sorta in a "pickle". I am just gonna have to take a deep breathe and plunge in. Do you use a longarm or do you use a DSM? Again--great job!

I don't know that I agree about the middle tones for right triangles. This quilt is really striking and I think the contrast is really working for it. The pinks and oranges and blues really keep your eyes moving. I love the pounced firework things.

Bella is beautiful, too.

I Love this quilt!!! I love how the pattern ebbs and flows; shows up more here and less there; keeps your eye moving and looking for more. Fabulous job on quilting also. I'm SO glad I found your blog.

Great finish, and great title for the quilt. Stay warm up in the frozen tundra. I'm so jealous that you have things popping out of the ground already. I enjoy your flower/yard shots almost (but not quite) as much as your quilt shots.

Such a dynamic quilt - it makes me want to make one in that pattern, too. There's so much piecing though... I'm getting piecing-lazy, I think :)

That is one beautiful quilt! Storm at Sea is such a lovely pattern.