I did a lot of stuff this weekend, but the thing I'm happiest about is pushing through the stars for the raffle quilt.  I got the stars pieced a couple weekends ago and then put them together.  There's a whole tutorial being worked up about how I made points match that didn't want to match.  I tried something and it worked.  And, it was so easy.  And, it worked more than once. 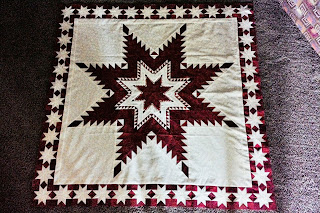 I also spent as much time out in the yard as I could.  This daylily bloomed for me while I was out there.  When I started, it was still closed.  But, by the time I was ready to go in, it was beautiful 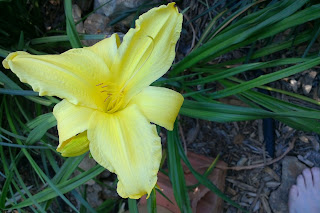 And, we got the first bloom from a daylily named Charlene's Patio. 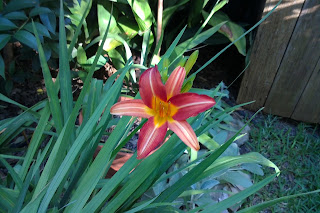 I also did some hand quilting.  There's another post in the planning, not so much a tutorial as "things I've learned about hand quilting that I can share" kind of post.  Things that would have helped me relax when I was learning to hand quilt, and even when I was starting this project and decided that it was going to be heavily quilted.  I'm on the fourth feather.  Whoo-hoo! 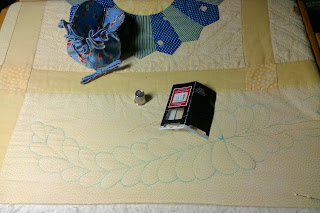 Remember that sharp needle I accidentally picked up the other day?  Well, it was starting to soften in the middle and bend, so I went in search of a brother for it.  I tested a whole lot of sharps before I found the package that one came out of.  One thing I was reminded of is that size is relative to manufacturer because a size 10 from one company was not the same as a size 10 from another.  But, these are Richard Hemming and Son needles, sharps, size 10.  They have a nice length, and are sturdy enough to stack some stitches on, and they slide through that cotton batting like butter.  I've used about a half the package I bought several years ago... and I need to go in search of more.  They will not last like a between for hand quilting.  But, they more than make up for it in ease.  I'll save those betweens for when I'm hand quilting through wool or poly.

Everybody have a great Monday.  Syd's first Monday off school.  Enjoy it kiddo... tomorrow, there will be chores.

Please share your tutorials with us over here in Scotland! By the way, the day lilies look gorgeous. We are having our first day of a wee bit of warmth and the garden is finally coming to life…..