So, that's what happens when it rains

Oh, we had so much rain.  Harmful in quantity, and yet our water resources continue to fill, even though it hasn't rained in five days.  We really needed that.

All that water had great effect on my lawn and garden.  Now that the rain has stopped and the sun has started to shine, things have really started to spring up.  Last week, the tomato plants dropped all their fruit and had no bloom.  This week, they have started to spring up, as have all the other sun lovers.


This daylily is the offspring of a "spider" daylily and probably a common yellow.  The spider parent is lost, but, I have this.  It probably doesn't exist anywhere else. 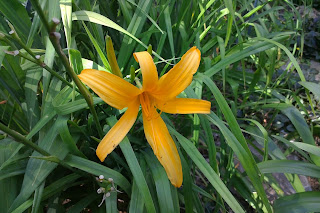 And, this daylily is called Yabba-Dabba-Do.  And, it's just getting started. 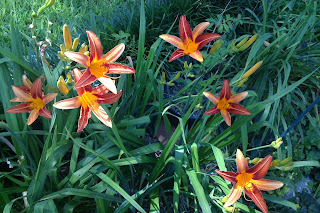 The red knockout rose is about the burst with bloom. 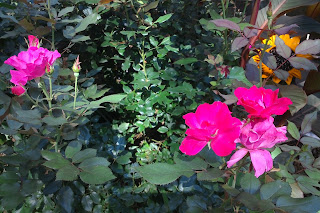 The phlox... I'm not so sure about the phlox.  Hopefully, if they get some sun, they'll put out more blossom at the head of each stalk. 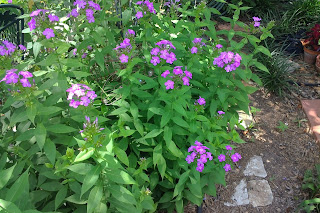 This is one of those kind of part sun/mostly shade places where I've tried to add interest in leaf shape instead of trying to get things to bloom. 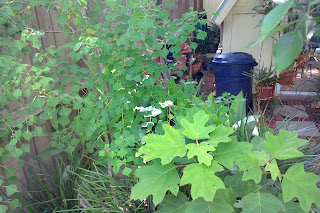 Yesterday was Syd's last day of Junior year.  She passed.  Her next task is to find a job.  The last thing she did was sing at graduation.  I picked her up after and she wanted a slushee.  Okay, she asked for a slushee and while I wasn't immediately inclined to go out of my way, we ended up getting one.  And, I know I got a boatload of brownie points for that.  That's cool.  And, I also got a chance to very gently express some feelings about the last couple weeks of school and the scramble she goes through at every grading period to get caught up.  And, how frustrating we find that.  But, that was minimal...a side note to taking her for her really gross sounding slush with ice and syrup and candy.  I settled for a simple cherry limeade.  There's nothing better on a hot day than a cherry limeade soda on crushed ice.  MMMMMM.

Okay, y'all.  I gotta go to work.  We have an appointment scheduled for tomorrow to deliver the baby quilt to its very pregnant Mama.  It's hard to set things like that up with people you don't know very well.

Such a pretty garden! I'm working with part shade, too, and haven't found anything that doesn't mold or get leggy in those spots.

After my junior year, I worked at a McDonald's with about six of my friends. It was a lot of work (busy from putting on an apron until you finished cleaning up and walked home.) But it was better because there was always someone on shift I knew and could have a laugh with.

The rain has definitely made things bloom and blossom except for my poor peach tree. It had 50 peaches blooming but unfortunately the spot its planted holds water so it's gone but the tree trunk. ;o(