Sometimes, you have to try more than once 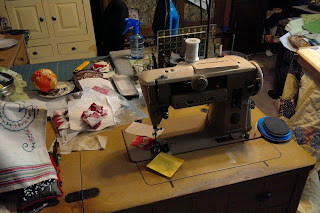 I wanted multiple sewing stations, each set up to work on a different type of project.  I wanted the custom cabinet that Rob made me for the Bernina 930 painted, and am trying to hire Sydney to do that.  So, I moved it out over the weekend, and set the 401 up.  I haven't sewn with this machine in a while.  It had a problem in the bobbin case/hook race area that was making a terrible banging sound.  So, I moved it to the repair area and found out that the bobbin case and the positioning lever were too close together, which caught the top thread as the hook brought it around the bobbin and made a popping sound.  Now, how that 50 weight thread, popping around an obstacle was making that loud banging sound, I have no idea.  But, it was.  Loud enough that I thought it was a much more significant problem that I was going to be tackling.

Anyway, it's sewing again, and it has a very minor swishing sound as the thread moves around the bobbin.  That may be as good as I can do on this machine as it was heavily used when I got it.  The previous owner sewed professionally on it.  But, it still makes a lovely stitch.

Don't pay attention to the pile of stuff in the upper left.  That is a couple of projects that were too close to being done for me to move them anywhere else (and forget about them).  The next picture will be the machine on that side, where I am actively working on those projects. 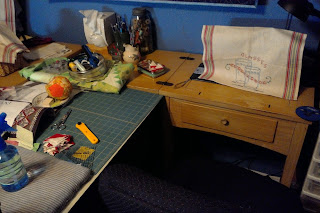 This is my Grandmother's 15-91.  Another wonderful machine.  It needs maintenance.  I need to remove the handwheel and replace all the old lubricant in there.  But, I cannot get one screw loose that would let me in there to do that.  So, she starts a little sluggish until she warms up, but then she purrs and is almost silent.  Eventually, I will get that screw out, but not today.

The tea towels are an idea I saw at a professional sewing studio.  They had taken embroidered tea towels and added ties to the sides and were using them as machine covers.  I happened to have three beautiful, handmade, vintage tea towels that our friend Linda had given us.  I haven't added the ties.  I want to use a nice ribbon in a green that matches the green stripe in the towel, but I'm still using them to cover machines.  And, I really like the idea. 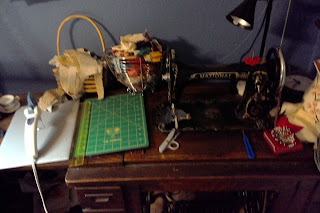 This is the treadle two-spool.  This is my most recent addition to the collection of machines.  The other day, I went to Goodwill and picked up the lamp on the right side for $4 and that was the missing piece to get me sewing here.  This machine does not have the smooth action of my Singer treadle.  And, because it has the wooden dust cover under it and I don't want to take that off... and because I have long legs, it's taken some getting used to.  I'd love to use it to FMQ, but before I try that again, I need to get more used to the machine, so that's the focus now.  This is where I'm making those paper pieced log cabin blocks with half inch finished strips.  That's a long term project that requires I do a lot of making the machine do what I want it to do, and that is going to make me very familiar with how it works, including its quirks.  And, believe me, all my vintage beauties have their quirks.

I also have the serger set up and a couple things to put away, but I think this really makes things more usable in this room.  My next task is to clear up my side of the garage again.  I'm having scrap challenges, and am trying to wrangle them back into a usable order.  And, my sewing machine collection has gotten a little out of bounds out there, with multiple machines in states of disrepair, waiting for me to find out how to correct what's wrong.  Or waiting for me to find a part.  That's the dangerous side of collecting anything, right?

Please say right.  It will mean so much to Rob if you all agree that collecting takes up space.

Sydney has a second interview this morning.  Whoo-hoo!!!  She took the initiative, at the suggestion of her friends, to call the hiring manager yesterday, just to follow up.  He said he would call last Thursday, and did not, and she just asked what the status of her interview was.  And, he told her to come in today for a second interview and bring her social security card and an ID in case she needed to start filling out paperwork.  He still has an afternoon opening.

That sounds so promising.

She is going to be braver and smarter than me.  That's just what every parent wants.

Have a great Tuesday.  Lane

The tea towels on your vintage machines are just charming! It sounds wonderful to have multiple machines ready for multiple projects and purposes. Even if keeping them takes up space, and requires re-arranging every so often.
Best wishes for Sydney's employment; I appreciate your sentiments for her to grow stronger and smarter than yourself!

I love the idea of the tea towels! I don't have any but I'll be sure to be on the lookout at yard sales.
Good for Sydney! I hope that she gets the job!
As for sewing machines...I'm in the same predicament. I just love these vintage machines. I recently went so far as to drive 6 hours one way to purchase an Eldredge 2 spool. I really enjoy cleaning, tinkering and using them to quilt.
I may not comment often but I want you to know that I thoroughly enjoy reading your blog!

It seems like there's a trend now--the person hiring waits to see who really wants the job (illustrated by calling them back) before deciding who to consider further. Good for Syd!

I always enjoy your blog so much--thank you for it.

I have a non-tea towel cover started on one of my machines. Just made from a remnant. I was going to put elastic on the sides for fitting but haven't quite gotten around to it yet. Ribbons are a prettier idea but elastic might be less trouble for me.