That quilt I always wanted to make

After I finished putting the Texas Braid together this weekend, I needed something...I don't know, something else scrappy.  And, I picked a project that I've put off for years.  I've been collecting 1" strips since I started saving scraps, and I've stashed them and held on to them.  And, now, I have two baskets full.  So, being in a scrappy mood, it was time to at least check out the feasibility of this project. 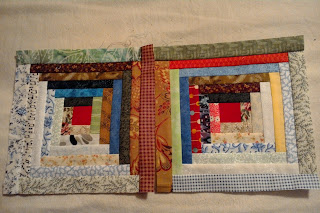 I have a bin of dark scraps and a bin of light scraps, and I see this happening, over a very long time.  I think it took a couple hours to make these two blocks on Sunday afternoon...I made them during a movie.

I had already tried this and realized that I could only do it as a foundation project, and you guys know how much I love freezer paper piecing, so I drew out the pattern, and transferred it to several squares of freezer paper. 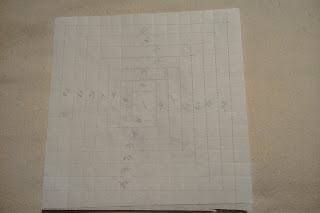 This time.  But, this is like the third time I've tried.  This is small scale for a log cabin block, so if you're thinking about it, think about it twice.  Getting those consistently straight lines as you go around the block are "difficult".  I doubt it could be done without a foundation.  And, if it could, it would take forever.

And, even though it's wasteful, the easiest scraps to use are wider than an inch, so I'll likely raid the 1 1/2" strip bin for part of this, too... especially since about one in ten 1" strips get tossed because it's not really 1" wide.  I guess I thought this wouldn't take so much precision... if I thought about what every project would take, I'd never do anything.

Sydney's interview went well yesterday.  She would not let me wait.  She said "I'm not a child".

When we pulled up in front of the restaurant, she had a bit of a panic attack and a little cry.  That was hard.  But, I was patient and let her go, and then I started with the funny and encouraging things she needed to hear before she went in and did one of the hardest things she'll ever have to do, for the first time.

The guy didn't sound very encouraging.  Even though it's fast food, they sell margaritas and beer, so there's a lot of stuff she can't do because she's not 18.  One of the things I had her make sure and do was find out exactly what job she was being interviewed for because I didn't think she was going to be happy washing dishes.  She could make tacos and work the drive through.

Okay, I'm good with that.  She should hear back on Thursday.  He gave her the standard line about having other people to interview.  It's only three days a week.

She's still applying at other places.

Everybody have a great Tuesday.  Thanks for all your encouraging words.  I empathize with all of you that are going through this summer job thing with me.  Thanks for letting me know.  It's nice to not feel alone.

I love your log cabins! Don't worry about Syd. She is learning to be an adult. Learning this now means she won't be living in your basement when she's 30. Believe me, this is a good thing.:) Give her a hug and tell her she's great. Next time she won't need you and that will be a little sad too, but it does feel good to see them become who they are.

My grand daughter went for her road test, we knew she wouldn't do well since she doesn't want to drive. She is 17 but her permit would have expired. She didn't make it (which is okay) at least she knows what they expect. In practice she drives very slow but for the road test she drove 1 mile over the speed limit and that is a failure.