It's a dog's butt

No, I'm not already making disparaging comments about marriage.

It's really, a dog's butt, but you're going to have to wait til the end for the title to make sense. 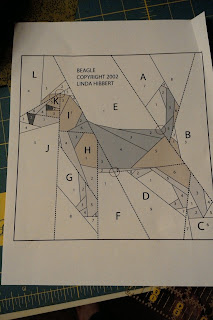 So, I traced it on a transparency.  Rob's beagle is a female, so when I traced it, I left out a couple of gender specific pieces and had to do some renumbering. 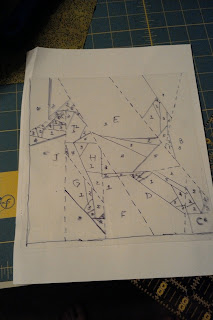 And, I used the overhead projector to enlarge it on the wall. 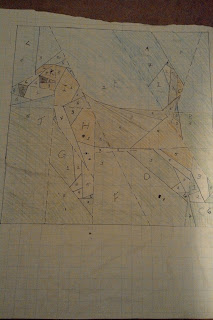 I traced it, and colored it in.  Rob picked the fabrics, and I was off...  There wasn't enough of the green for the background, so we picked two backgrounds that he liked and added a horizon line.  Even with that, I'm running low on green, so the horizon line is being moved lower, to take less green fabric, and piece A, the left edge will be remade with that new division between green and blue.

So far, I've made a dog's butt, hence the title. 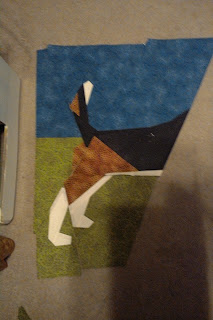 Marriage has made exactly the difference I would have expected, knowing me and Rob.  There's lots of calling one another husband, but little else is different.  We still went to the grocery yesterday, and we worked in the yard, and we cleaned house and we cooked and I quilted.  And, Syd did those things that teenagers do, mostly read and watch TV.  Except we smiled a lot...

I'm ashamed of some Texas politicians and so proud of others.  I'm appalled that people are still trying to make this about religion.  And, just when, in a country whose main theme is separation of church and state, do public officials, paid with my tax dollars, get a religious exemption from their job?  Okay, y'all.  Gay people cannot be the most objectionable people that you ever married.  I've seen the public.  Just put it in perspective, and stop acting like you're better than the rest of us.  God doesn't endow you with certain inalienable rights.  Religious history proves that.  The state does give those rights.  History proves that.

Travis county issued 313 marriage licenses on Friday.  Compare that to 17 the day before.  The future is coming y'all.  Don't be in the way when it gets here.

Everybody have a great Monday.

It's my first Monday as a married man.

Religions are infamous for deciding dogma based on mistaken ideas-- like the Sun revolving around the Earth-- and clinging to them with rigid tenacity. Love is like the gentle pressure of plants growing through hard soil and breaking rocks to grow and bloom in the sunlight-- you can't deny love or life, it always, gently and patiently, wins.

As a pagan I've been on the receiving end of quite a few Christian sermons. Please don't get me started. My attitude, if you love one another and you are not hurting yourself or anyone else, it's nothing to do with me. The sun still came up the day after so what are they worried about.
Even if it did bring about the Apocalypse they should have been pleased as it would mean they met their beloved God earlier.
Love the dog's butt by the way
xxxxxxxxx

Congratulations on your marriage. Presuming to dictate who someone loves is a godless act in itself. Hope you and your husband have a long and happy life together.

I don't know anyone else who celebrated with a dog's butt...but love works in mysterious ways. ;)

I agree with Elle - 'interesting' way to celebrate! It's going to be a mighty fine looking quilt block when it's done and it's lovely of you to make your new husband something that is so special to him.

Happied married Monday, and your dog's butt is TOO STINKIN' CUTE FOR WORDS! Looking forward to seeing the other end of that beagle!

Cute butt. And a BIG CONGRATULATIONS on your marriage.

Marj, raised in Seattle but retired to a little town of less than 3,000 in Mexico.

Religion is remarkable for lots of infamous things...the inquisition... turning a blind eye to the extermination of Jews, gays, disabled...and so on and so on. I find those who use religion to justify their negative behavior and/or ideas are always on the losing side of history. Keep and eye on 'em, but don't let them steal the joy! Dance anyway!

Congratulations! Much happiness to you both! Nice butt!

Congratulations to you both!

We are getting a beagle puppy! We get to pick her up next Saturday. She's adorable and so sweet. LadyBug is SO excited. That beagle pattern is super cute! Where did you get it?

There is a free program, Quilt Assistant, that is pretty awesome with creating paper piecing patterns. When I want to resize, I'll upload a scan of the pattern, "trace" the line, specify colors, (re)number and then it prints it out for you. I usually print on vellum paper, but I've also printed on freezer paper. I cut it to size and then line it up with a regular sheet of paper and run the iron over the top edge, just about 1/4" in along the edge that goes through the printer first. Just thought I'd share.