Still keeping all the balls in the air

I’m having a bit of my “parent feels like juggler” thing going on.  There’s balancing what the kid needs and what I need and what I need to get done and Rob deserves at least some attention.

I have my first speaking engagement this month.  That’s pretty exciting.  Sydney and I have started taking pictures, and Rob has done a short video and I’m making a list of all the things I need to take.  The subject is my vintage machines and how I use them in quilting.  That’s a subject I’m fairly familiar with…;-)

It’s also time to enter my quilts for this year’s Austin Area Quilt Guild show.  Yesterday we took pictures.  Of course, silk is nearly impossible to photograph, so I still don’t have a good one of that, even though we tried everything we knew about lighting.  I need to give up on good photos of that.  It’s just not happening.

And, part of entering the quilts is finishing them before the first of September so they’re ready to hang in the show.  But, I’m pretty well on track for that since I started quilting the tops in January.

But, I still found a bit of time to work on Rob’s  holiday quilt. 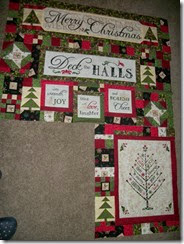 I got these three sections pieced.  Okay, so this thing is so fast.  I cut for about four and a half hours one morning.  That cuts the whole thing out and you bag it into four bags (you don’t need the misc bag that the pattern calls for).  And, then I started piecing the sub units and suddenly, whole sections were going together.  There are very few seams to match.  It’s a piecer’s piece of cake.

I know that one of my followers bought the kit.  BEWARE if you prewash the panel that came with it.  It shrinks significantly. 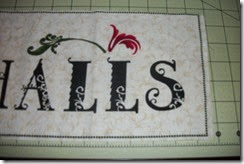 Those little line up stars around the edge were supposed to be the cut line, but you can see how far outside the cut line I had to cut the sections to get them to be the size they needed.  The stars end up showing in the piecing, which would be okay, but they don’t show consistently.  So, I spent part of my time re-cutting these smaller and adding borders or making borders wider to compensate.  Spend some time thinking about where and how much you need to cut if you end up in the same boat.  Sometimes, I only needed to compensate on two sides and not all four.

And, there had to be some gardening time. 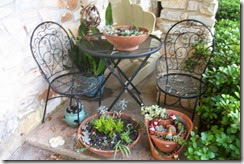 This is my little succulent vignette on the front porch, including the gnome garden.  I expect my gnomes will start to climb into other pots soon.

And, here’s the picture we’re using of the Indian Orange Peel quilt.  It would already be entered, except we’re having trouble with a name.  So, I have today to settle that. 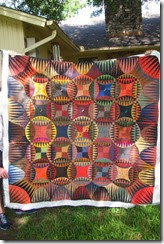 Have a great Monday.

every year i'm tempted to do a Christmas quilt! still haven't gotten around to it!
Frankie
http://www.knitwits-owls.blogspot.co.uk

I wonder if Diane Gaudynski might have some tips for photographing silk whole cloth quilts? Otherwise, I fear most of us will never get to see it properly.

I love the orange peel quilt. Why does it need a name?

It's unfortunate that the panel shrinks, but it would probably be worse to not wash first. Thanks for the heads-up! It looks great! I love the Indian Orange Peel, but I'm terrible at names. Good luck at the show!

love the Indian Orange Peel quilt.Like the name Brenda suggested. Want to see Rob's Christmas quilt when it is finished. Gonna be specular I'm sure. Don't worry about the speaking engagement. You know the topic inside and out. Piece of cake. You can bring the silk one next time you come. You have quite a talent. lum

EEEEEEEKKKKK!! There's my quilt!! ;)
it is just so beautiful, and if it doesn't win top honors, I'm gonna come out there and open a can of whup ass on some judges!!!

Don't you hate that about kits and pre-washing? Slightly different situation, but I purchased a block of the month project that included the pattern and fabrics, snail mailed to me each month. I had a ball working the hand applique each month, but once I'd finished all the applique, I discovered that I didn't have sufficient background fabric and block border fabric to create completed blocks the correct size. Grrrrrrr! Why oh why did the shop have to be so stingy - would it have hurt to have cut the fabric an extra inch or so longer so that those of us who pre-wash wouldn't be left short? The blocks have been languishing for almost two years. I think the only solution is to remove the block borders and use other fabric to replace them.