I’ve been making slow and steady process on the silk quilt.  I’m in a very slow part, where I’m filling in background.  It seems to take forever, if you look at it day to day, but it’s really going quite fast, considering the space I’m filling in with thread. 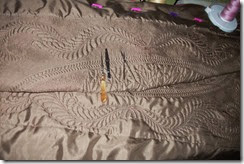 This feather border is above and below the picture of the house (house is folded into the middle of this picture.  The below is all filled in.  I started there because I have a theory that the one section of a quilt that people don’t study too closely is the lower right.  So, if I’m going to be starting something new, that’s the place to do it.

Why do I think so?  Well, I’ve observed people at quilt shows.  They start at the upper left, like reading a book.  And, they go across, then back to the left and down a section, still like reading a book.  You can almost hear the typewriter’s bell, each time they start a close up of a new row.  My theory is that by the time they get to the lower right corner, they’re so saturated with what I got right, they won’t notice what I messed up…they’re ready to turn that corner over and get to the label.

The one drawback to this background filler is that you need to make a knot at the beginning and ending of each echo section.  And, if I want my echo to really blend in, then I need to create small echo sections.  That’s a boatload of knots.  I tie them off as I can, but I still ended up with at least a hundred thread ends.  During the movie The Iron Lady, I tied knots on Saturday.  I tied as long as the movie lasted and still have about 4 to go.

That is boring work.

I put the three tools I use most in the picture.  A thread snip with curved blades that I use points turned up so I can slice off thread ends without piercing the quilt surface with the tips.  And, my stiletto, which I slide under the foot and grab the bobbin thread to pull to the top on the first stitch of a section.  It’s also handy for pulling the bobbin thread to the top at the end of a section, but sometimes, that requires me to thread it into a needle and bring it to the top.  And, a pair of tweezers.  I’m using them to pull out tiny bits of paper as I encounter them and to help pull threads.

Tedium, tedium, and also excitement.  I need to fill out my entry forms this week and take pictures of the unfinished quilts to get them into the show.  That means I have to decide between two quilts as my third entry.  One is finished.  The other is not quilted.  I’m really leaning toward the finished one.  That would take a boatload of pressure off.

Everybody have a great Tuesday. The girl is in a bad mood, so I offered her the day off.  She declined because of the holiday on Friday…doesn’t want to miss two day’s pay.  Smart.

that really is some stunning stitching
Frankie
http://www.knitwits-owls.blogspot.co.uk/2014/07/gotta-catch-em-all.html

Hi Lane
Wonderful work on the silk quilt. I wish I could actually see it in person when you are finished.
You did not mention which quilt show you are entering three quilts in. Please mention where the show is if you can share.

I think I'd go with the finished one, too, you can always show the other one later.

Sydney is thinking like a responsible adult by thinking through which days are good to have off. Very cool!

Well, I can't wait for your tomorrow post, excited...